Attorney for Drug Charges in Michigan 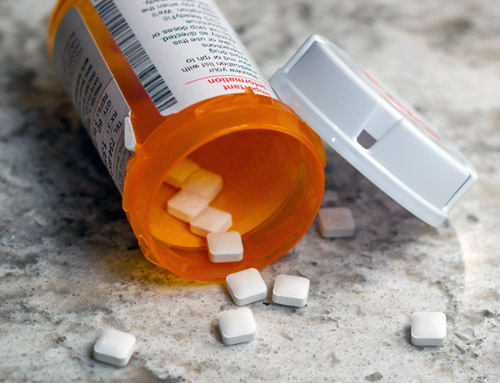 In Michigan it is against the law to possess heroin, cocaine, ecstasy, LSD, peyote, analogues (“designer drugs”) and prescription medications without a valid prescription. Depending upon the drug possessed, the amount possessed, the intended use of the drug (personal vs. for sale), and any prior criminal drug history, the penalties vary. In Michigan, there is also what is called “constructive possession,” which means you can be charged with a drug possession crime just by being in the place where the drug is being used or stored – regardless if it didn’t belong to you and you never intended to use it.

The criminal defense attorneys at Kelly & Kelly P.C. are experienced in all aspects of drug charges in Michigan. This includes both misdemeanor and felony offenses as well as criminal record expungements. This knowledge and experience is important in protecting your future.

There are many different drug charges with varying degrees of penalties. The severity of these penalties depend on the type of substance, the amount in possession, and several other factors. This section lists some of the most common charges and penalties associated with drug related offenses.

Possession of Marijuana
Is punishable by up to one year in jail and $2,000 in fines.

Distribution of Marijuana
Up to 5 kilograms is punishable by up to 4 years in jail and $20,000 in fines. The severity of these charges increase for distribution of amounts greater than 5 kilograms.

Distribution of Prescription Drugs
Carry penalties that vary depending on the type of substance and amount in possession. In Michigan, the sale of a controlled substance is punishable by up to 40 years in prison with potential fines amounting up to $250,000.

Distribution of Adderall
Without a license is considered a felony with fines and prison sentences varying depending on the amount of the drug possesed. For example, an amount of less than 50 grams is a felony of up to 20 years, a fine of $25,000 or both.

Possession of Cocaine
Is considered a schedule II drug, those caught in possession of cocaine in Michigan can be charged with a felony. Punishments for possession of under 50 grams is up to 4 years in prison and fines of up to $25,000. Larger quantities carry significantly stiffer penalties.

Possession of Ecstasy
Is a felony regardless of the amount. This offense is punishable by up to 10 years in prison and/or $15,000 in fines with increasing penalties as the amount in possession goes up.

Distribution of Ecstasy
Is a felony, resulting in a prison sentence of up to 20 years and fines of up to $25,000 for amounts between 50 and 450 grams. Sentences for this schedule I drug increase substantially as the amount in possession increases.

Possession of Methamphetamine
Is a felony offense regardless of the amount possessed. In Michigan, this can result in a sentence of up to 10 years in prison and a fine of up to $15,000.

Distribution of Methamphetamine
Is a very serious felony in Michigan. Possession with the intent to distribute can result in a prison sentence of up to 20 years, a fine of $25,000 or both.

Heroin Possession
For amounts under 50 grams is punishable by up to 4 years in jail and $25,000 in fines. These penalties increase for amounts greater than 50 grams.

Possession of Analogues
Is also known as “Designer Drugs.” Possession of designer drugs is a felony punishable by up to 2 years in prison and/or $2,000 in fines.

Possession of LSD, Peyote, or any Schedule V Controlled Substances
Is a Misdemeanor that’s punishable by up to 1 year in county jail and/or $2,000 in fines with varying penalties as the amount in possession increases.

Under Michigan Law (MCL 333.7403), drugs are listed in 5 categories of controlled substances. 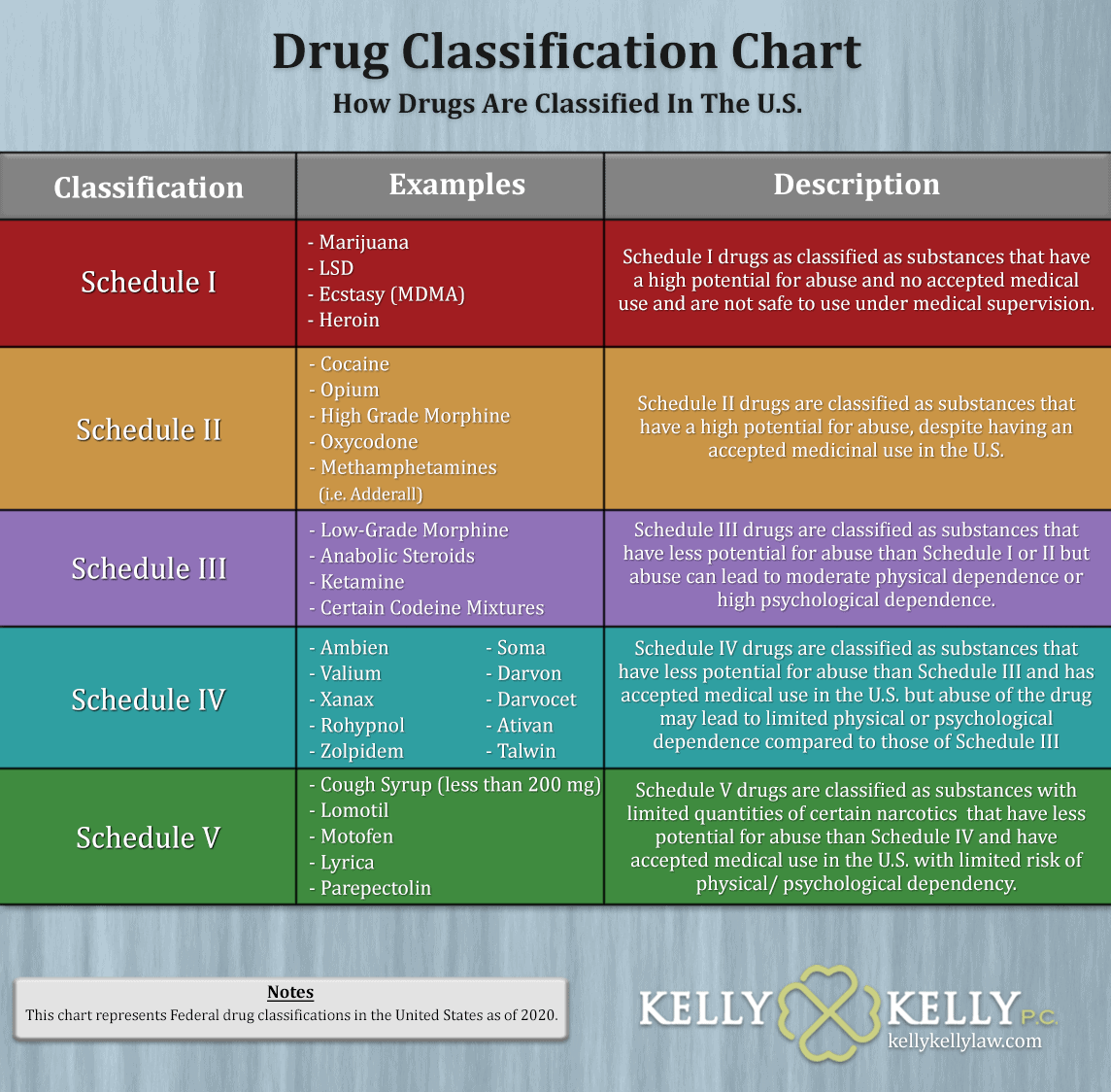 Schedule I: A drug is classified as Schedule I if it has a high potential for abuse and no accepted medical use in the United States, and is not safe to use under medical supervision. Types of Schedule I drugs include: LSD, Peyote, Ecstasy (MDMA), Mushrooms, Heroin, and Marijuana. Schedule I offenses are the most widely prosecuted offenses in Michigan, so if you are facing a charge for possession of a Schedule I substance it is important that you contact an attorney immediately.

Schedule II: A drug is classified as Schedule II if it has a high potential for abuse, despite it having a currently accepted medicinal use in the United States, or currently accepted medicinal use with severe restrictions. Types of Schedule II drugs include: Cocaine, Opium, high grade Morphines, Oxycodone, and Methamphetamines (Adderall). It is important if you have a valid prescription for any of these Schedule II drugs that you keep it with you anytime you are traveling with your medications. Putting your meds in a ziploc bag as you head out for a long weekend up north is not safe. If you are stopped by a police officer and he searches you or your property and discovers the medications without an accompanying prescription, you could quickly find yourself charged with a serious felony for “Possession with the Intent to Deliver.”

Schedule III: A drug is classified as Schedule III if its potential for abuse if less than that of Schedule I or Schedule II drugs and it has currently accepted medical use in the United States, but abuse of the drug can lead to low to moderate physical dependence or high psychological dependence. Types of Schedule III drugs include: low-grade Morphine, Anabolic Steroids (Ketamine), some Codeine mixtures, among others.

Schedule IV: A drug is classified as Schedule IV if its potential for abuse is less than that of Schedule III drugs and the substance has a currently accepted medical use in the United States, but abuse of the drug may lead to limited physical or psychological dependence compared to those of Schedule III substances. Types of Schedule IV drugs include: Ambien, Valium, Xanax, Rohypnol, Zolpidem, Soma, Darvon, Darvocet, Ativan, Talwin, and Tramadol, among others.

Schedule V: A drug is classified as Schedule V if its potential for abuse is lower than that of Schedule IV drugs and has a currently accepted medical use in the United States along with limited risk of physical or psychological dependency, and consists of limited quantities of certain narcotics. Types of Schedule V drugs include: cough syrups with less than 200 milligrams of codeine or per 100 milliliters (Robitussin AC), Lomotil, Motofen, Lyrica, Parepectolin.

When someone is arrested for a drug offense, the charge is usually for possession of a schedule I substance (i.e. marijuana) or Schedule II substance (i.e. Cocaine). Here’s a simplified list of penalties depending on the amount in possession.

Michigan law requires driver’s license suspensions for convictions on drug charges, even if you were not driving at the time of the offense.

First Offense – If you do not have any prior drug convictions, your license will be suspended for 6 months. However, you may be eligible for a restricted license after the first 30 days of that suspension.

Offenses With Prior Convictions – if you have one or more prior drug convictions within 7 years, your driver’s license will be suspended for 1 year. No restricted license is allowed for the first 60 days of the suspension.

Reinstating Your Driver’s License – After the suspension time has passed, you may have your license restored to full privileges upon payment of a $125 reinstatement fee. This fee is in addition to a reinstatement fee required for any other driver’s license sanctions.