Being charged with a second DUI in Michigan is a very stressful and potentially life altering situation. Michigan has some of the harshest punishments in the country for those convicted of driving under the influence, with significantly higher penalties for repeat offenders. A conviction for a DUI second offense can result in a loss of your freedom, employment and driving privileges. In addition, it can also result in collateral consequences such as loss of your license to carry a firearm, increased insurance costs and difficulty with vehicle rental and travel. Because of the severity of the consequences for a second DUI conviction, it is very important to understand your rights and legal options to ensure you have the most favorable outcome possible.

In Michigan, a second DUI is charged as a misdemeanor unless there is serious bodily injury, harm or death – in which case it would be upgraded to a felony. Similar to first offense, a 2nd OWI conviction can result in multiple forms of life altering punishment. However, the amount and length of punishment is significantly higher with a second conviction. Below are the penalties a person convicted of DUI second offense can expect to receive. 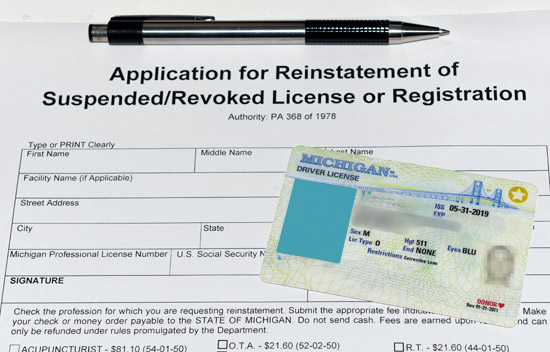 Something that is distinctly different about second DUI conviction punishments is the revocation instead of suspension of a license. Suspensions normally are for a set period of time, after which a license will automatically be reinstated. Revocations on the other hand are permanent, requiring the offender to wait a minimum of a year to begin license reinstatement.

Reinstatement can be a time consuming and lengthy process. After filing, you will have a hearing at the Michigan Secretary of State to fight for your case. During this hearing, you will be required to submit evidence that you have your substance abuse problems under control and that you’ll be able to drive safely and responsibly again. To help bolster your case, it is wise to enroll in substance abuse groups such as Alcoholics Anonymous to show that you are taking an active role in controlling your drinking and substance abuse problems.

Q. What happens for your second DUI offense?

Penalties are similar but significantly stiffer than a first time DUI. Most significantly, your license is revoked instead of suspended which requires a lengthy process to have it restored.

Q. How many points does a second DUI add to your driver’s license?

This adds six points to your license.

Q. How long is your license suspended after a 2nd DUI?

There are no suspensions on second DUI, only revocations. Revocations are indefinite, unless your license is reinstated through a lengthy appeals process.