Lawyers For Assault & Battery in Michigan

Being charged with assault and battery is a very serious matter. To put this in perspective, convictions carry penalties ranging from a Misdemeanor up to 1 year in jail, to a Felony punishable by 25 years to life! Even if you were acting in self-defense, without witnesses or video, you could potentially face penalties. As a result, it’s important to protect your rights and affirm your innocence.

As experienced lawyers for criminal defense, Kelly & Kelly can protect your future and present your case with proper facts/evidence to the prosecutor and judge.

Although assault and battery are generally used together, each of these charges can exist independently from one another. Simply put, assault refers to an act which causes a victim to sustain physical harm while battery refers to the actual act which caused injury.

In Michigan, there are different classifications of assault and battery charges. The punishments and fines vary depending on the severity of the charges. There are also other factors such as prior convictions that may impact the severity of the punishment. Below is a list of various classifications, fines, and penalties for A&B charges obtained from Michigan Compiled Laws MCL 750.81. 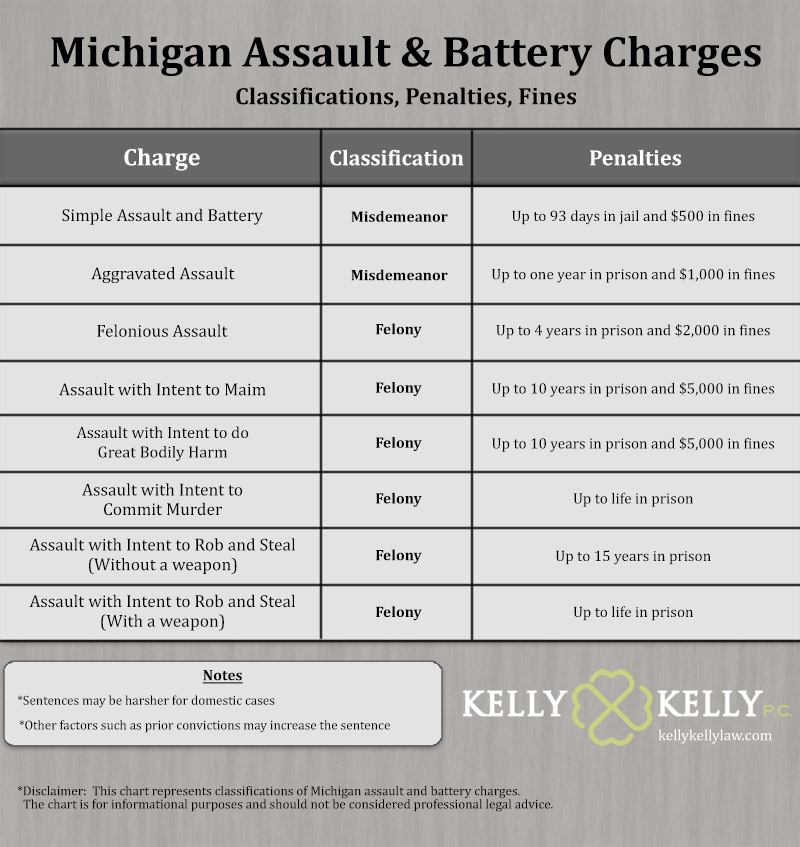 In order to determine whether or not a person was acting in self-defense, the facts and circumstances of the incident must be taken into consideration. If you’re being charged with a violent crime in Michigan and you believe you acted in self-defense, it’s important to have experienced legal counsel representing your best interests.

According to the Self Defense Act in Michigan, 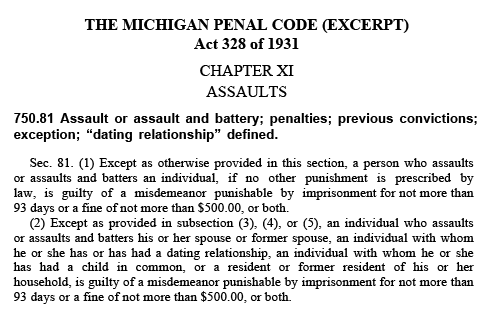 Domestic Violence (DV) crimes in Michigan generally carry heavy penalties. It’s not uncommon for police to arrest a suspect when only hearing one side of the story. Furthermore, Prosecutors and Judges are quick in making decisions such as the enforcement of a “no contact order.”  Whether you’re a victim of domestic violence, being wrongfully accused, the domestic violence lawyers at Kelly & Kelly are here to help ensure the Court hears both sides of the story and that legal rights are upheld for our clients.

Domestic Assault charges in Michigan have varying punishments ranging from a 93 day offense to a 5 year felony. The Michigan Legislature differentiates between a general assault and battery charge and domestic violence by determining whether or not the individual’s are in a “dating relationship.” For example, according to the Michigan Legislature MCL 750.81(2),

“dating relationship means frequent, intimate associations primarily characterized by the expectation of affectional involvement. This term does not include a casual relationship or an ordinary fraternization between 2 individuals in a business or social context.” (Michigan Legislature, 2017)

What If The Assault Occurred After a “Break Up?”

Regardless of whether the assault occurred before or after a “break up,” if it’s determined that the individuals are/were in a “dating relationship,” the suspect can be charged with domestic violence in Michigan.

Simply put, Aggravated Domestic Violence is when the victim suffers a serious injury. For instance, a serious injury may involve disfigurement, medical treatment, physical impairment, etc. If Aggravated Domestic Violence is proven, then the perpetrator is charged with a 5 year felony offense. If the perpetrator has a prior criminal record, this punishment may be extended.

A&B charges are very serious in the State of Michigan. These charges can be serious even if someone was acting in self-defense. If there isn’t any video evidence and/or witnesses, it’s possible an individual may still face serious penalties. We have the knowledge and experience to present your case with proper facts/evidence to the prosecutor and judge.