Sexting is becoming a rampant problem in many area high schools. Teens under 18 may think that sharing a nude photo of a fellow class mate is not a big deal , they are wrong. Sexting has serious social, emotional and legal consequences. If sexually explicit comments are made through text, this is not unlawful. A photograph showing nudity of a person under the age 18 is a criminal act, and a felony in Michigan. Learn more about Michigan sexting laws below. 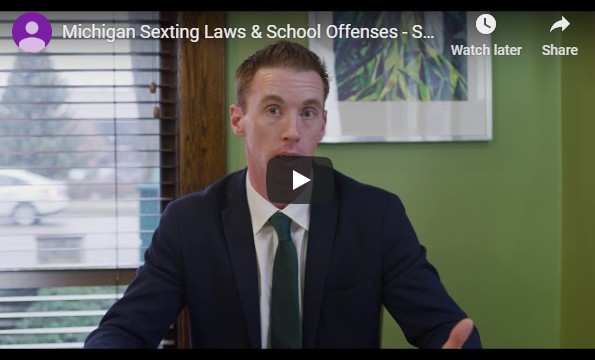 Take this scenario happening at the local high school. 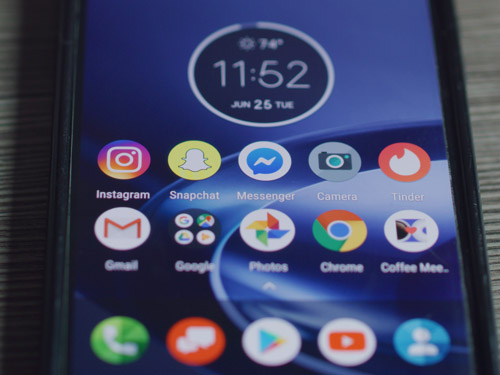 #1 If a 16 year old Deanna sends her boyfriend Jason a picture she took of herself topless she could possibly be facing 3 felony charges for making, distributing and possessing illegal pornography. If the boyfriend requested that she send it he could have an added solicitation charge added. If Jason sends the photo to Stevie, then there is another count for distribution.

#2 If Stevie is shocked at the photo , but keeps it on his phone for a couple of months he is more likely to be charged with Possession of sexually explicit material a 4 year felony.
If Stevie is shocked and embarrassed , sends Jason a message back that says “don’t ever send me that again” and erases it , Stevie is less likely to face criminal charges.

The law treats the purported victim Deanna as harshly as Jason who disseminated the photo, likely without his now former girlfriend’s permission. What was believed to be a harmless prank is really a situation where all the teens involved could be facing serious felony charges.

The pornography laws did not anticipate a future issue in which electronic dissemination of inappropriate photographs between teens would be treated as serious criminal penalties. A 40 year old collecting pictures of underage children and a teenage kid making a dumb decision to forward a picture of his bare bottom can both be prosecuted for child pornography.

In fact, there was an article published by MLive on minors and sexting. This article discusses a study that was conducted by Drexel University. In this study, more than half of surveyed college students admitted to sexting as minors.

A person convicted of this crime must register and report as a sex offender. In the future the convicted felon can never be present on school grounds, play grounds or day care centers.

The best advice is for parents and schools to discuss these serious consequences with students to avoid not only criminal involvement but also the emotional damage and collateral consequences. Sexting is a way to harass and bully another teen which has led to not only an embarrassing situation but at least one young woman took her own life rather than deal with the shame.

If a teen is under investigation for a possible Sexting incident it is imperative that the teen and parents discuss the matter with a criminal attorney and exercise their right to remain silent.

TAKE AWAY
– Never share or forward a sexually explicit photograph of another under the age of 18.
– If you receive a photo, immediately delete and advise the sender to stop sending you pornography.
– Contact a criminal defense attorney immediately before speaking to the police or school authorities if you are being implicated in a Sexting investigation.

You have a constitutionally protected right to remain silent, use it.

With the recent scandals involving high schools in Rochester and Romeo Michigan hitting the news, I think we are seeing the tip, of the iceberg of Sexting investigations.

Parents need to speak with their teens and become aware of their legal rights and Michigan sexting laws before speaking to any authority, such as school officials or the police.

Does my child or as a parent do I have to speak to the authorities ?

here is a constitutional right to remain silent. No one has to speak to school authorities or the police , juveniles also have this right.

You have a right to remain silent , USE IT, and shut up. Everything you say can and will be used against you in a criminal prosecution.

The police may make statements such as ” if you cooperate you may not get in trouble ” . This is not true , you can still be charged with an offense even if you are cooperative. Just say ” I do not wish to speak with you ” .

Can the police come to my home and search it ?

Not unless they present you with a search warrant that has been signed by a Judge ,it must specifically state what they are looking for and the scope of the search.

Can the police take my child's cell phone, computer, or electronics in the home?

No, not unless they have a valid warrant that lists exactly what items may be seized.

They should not take items not used by the child.

The police are asking if the parents will voluntarily turn over all of the electronic devices in the home. Tell them ” Absolutely Not ! ” , do not turn over anything unless you are served with a warrant.

It will not help your case to provide the police with any other information that may be incriminating or used to prosecute your child.

You need to check on the contents of your home computer,as it is very likely that other people may have used it.

Is Sexting between teens really a big deal, they are just kids?

Unfortunately it is a big deal,as this activity constitutes child pornography which is a felony in Michigan. A conviction of child pornography can require the person to register as a sex offender for the rest of their lives.

What should a parent do ?

Talk to your kids about Sexting if they are over the age of 12, or are mature enough to have a cell phone, IPad,or Laptop. Tell them not to take or share nude photographs of their breasts, pubic area, genitals, or buttock.

Tell them that their bodies are private and no one should be looking at them naked. Explain that photos that are posted on the Internet can be accessed by many people including creepy old guys.

A parent should have all the passwords to their kid’s accounts including Face Book, Twitter, Instagram. If you are really worried, just disable the camera, at least they cannot take nude photos of themselves.

Check photo albums on all electronic devices that your child uses.

Speak to other parents about this issue.

Figure out how Snap Chat works, have your child explain some of the media options they use.

Does this snooping invade my child's privacy, won't they be mad?

Absolutely , so what ? You are the parent and it is your duty to protect them . If they are Sexting they are involved in a dangerous and unlawful activity. It is better to have a child pout about how unreasonable you are rather than see them charged with a criminal act with possible lifelong consequences.

At what point should I speak to an attorney ?

Your cousin is married to an attorney, does that count ?

Only speak to an attorney who practices criminal law and has experience with juvenile matters. The attorney should be a licensed attorney in Michigan ( or one licensed in the state you live ).

Where We Serve Clients

The offices of Kelly & Kelly, P.C. is located in Northville, Michigan. Although this is our physical location, we represent clients all throughout Ann Arbor, Novi, Livonia, Wayne County, Oakland County, Macomb County, and many other locations throughout the State of Michigan. Our law firm is very familiar with the various court systems across the State.