There’s a great deal of confusion surrounding field sobriety tests. For example, many wonder if they have a legal obligation to take these tests after being pulled over and suspected of drunk driving. People also wonder what legal rights they have in these scenarios and what they should say to police. This article covers the topic of field sobriety tests in Michigan and provides answers to many of these basic questions.

What Are Field Sobriety Test?

Before answering some of these questions, let’s start with the basics and provide a brief overview on the subject.

Field Sobriety Tests (FSTs) are standardized tests used by law enforcement to determine whether or not someone is under the influence of alcohol or drugs while operating a motor vehicle. These FSTs are a method of gathering evidence and obtaining probable cause for an arrest if someone’s blood alcohol content (BAC) is above the legal limit.

You’ve most likely witnessed these tests being conducted on the side of the road or on TV. One of the most common types of FST’s involves an individual who’s suspected of drunk driving blowing into a Preliminary Breath Test (PBT) which is commonly referred to as simply as a “Breathalyzer.” 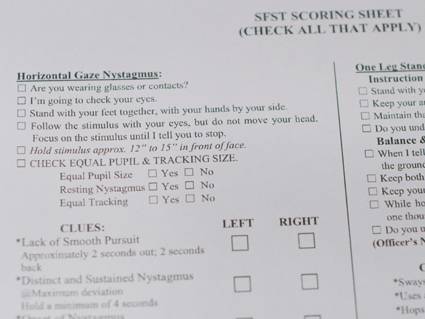 The police use a battery of testing methods to gather evidence and obtain probable cause for a DUI arrest. You can see an example of what police are looking for while conducting these tests on the Michigan State Police SFST Scoring Sheet.

Below are some of the most common types of field sobriety tests in Michigan.

Preliminary Breath Test (PBT) – Preliminary Breath Test’s measure Blood Alcohol Content (BAC) by having the suspect blow into a small hand-held device commonly referred to as a “breathalyzer.” The device provides police with a numeric reading which is used to ascertain the level of impairment. In Michigan, the legal limit is .08, so if someone is at, or above this limit the police will have the necessary probable cause to make an arrest.

Horizontal Gaze Nystagmus Test (HGN) – The HGN field sobriety test involves law enforcement observing a suspect’s eyes to measure the level of potential impairment.  Nystagmus is actually a medical term used to describe the involuntary movement of the eyeballs. In this test, the officer will typically use an object such as a pen and ask the suspect to slowly follow it with their eyes as they move side-to-side.

One Leg Stand – Simply put, the “one leg stand” test involves an officer asking a suspect to stand on one leg so that the officer can observe their balance. Here’s a list of standardized clues used by police to gather probable cause for an arrest. This list is taken directly from the SFST scoring sheet used by Michigan State Police.

“☐ Stand with your feet together.

☐ Keep your arms by your side.

☐ Maintain that position until you are told to do otherwise.

☐ Do you understand?

☐ When I tell you to start, raise either leg approximately 6 inches off

the ground, keeping your raised foot parallel to the ground.

☐ Keep both legs straight, arms at your side.

☐ Keep your eyes on the elevated foot.

☐ While holding that position, count out loud (one thousand one,

one thousand two) until told to stop.

☐ Do you understand?

(Officer’s Note: This test must be timed for 30 seconds)

Walk and Turn – The Walk and Turn FST is another commonly used test. You may have witnessed this on the side of the road or on an episode of “Cops” or “Live PD.” In this test, officers instruct a suspect to walk in a straight line. More specifically, they ask the suspect to place their left foot on a line and put their right heel against the toe of the left foot.

“Refusing is a word I don’t like to use because the police like to use it, you can decline, you cannot consent, you don’t have to volunteer. We don’t necessarily understand when they’re asking us to step out of a vehicle to come over here and perform these tests, if that’s a command, or whether it’s just a standard protocol.

Most people would never, ever been through a scenario like this before in their life and it’s really scary; so, many times people just go with the flow. The fact is you can decline to participate in any sort of field sobriety testing.

The candy on that is that doesn’t make your case go away; but, the officers can still find there’s probable cause to arrest you based on other information they’ve received. Fine, let them…understand that there’s a difference between those preliminary field tests being part of an investigation of a collateral criminal matter operating under the influence of drugs or alcohol vs. what you are compelled to take under Michigan’s Complied Consent Law; that’s the breathalyzer and blood test after the arrest.

PBT is a breath test you take at the side of the road that cannot be used as evidence of your guilt. It is however one of the components officers may rely on in forming probable cause to support the underlying arrest. So, of the test you should take or don’t take try to keep it as objective as possible. If you have relative medical conditions; things with your eyes, things with your speech, things with your knees, things with your hips, things with orientation, if you’ve seen a dentist in the last week and you’re under some laughing gas for a root canal…all of these could be relevant…and if the officer asks if you have anything that might affect it; don’t say NO, say I’m not sure!”

What Are Your Legal Rights?

Another common question involves whether or not someone has a right to an attorney when they’re stopped by an officer after being suspected of drunk driving. We produced a short video covering these topics and answering some basic questions surrounding the legal rights someone has when being stopped and questioned by police about drinking and driving.

“You certainly always have the right against self-incrimination. You do not have to answer any questions that may tend to incriminate yourself unnecessarily. Then, maybe you don’t know if they will incriminate you.

In that capacity, I recommend to my clients and my friends they use more of a default response…put it on the back of a flash card. If you want, put it on the back of my card. What that response needs to say “Respectfully officer, I can’t answer any questions without first talking to my lawyer. Now, this may be frustrating to the police; but, the demonstration of our rights is part of the bargain.

There are some officers that will say, “You know what, I don’t have a problem with that” because it may make their job easier, too. But, until you get the right information provided by a lawyer, you shouldn’t be answering any questions including whether or not you’ve had anything to drink.”

If a police officer asks me if I’ve been drinking, what should I say?

This is a fairly common question. People seem to believe that being honest in these situations is the best option. That is, people feel that if they “go with the flow,” cooperate, and are polite, then the police will take it easy on them and possibly even cut them a break.

Unfortunately, speaking as an experienced defense attorney, this is usually far from the truth. The reality is that any information you provide to law enforcement can and will be used against you in a court of law. This is written within the Miranda Warning that law enforcement officials read to alleged offenders.

Police officers and other law enforcement officials question suspects for the purpose of gathering evidence to support any subsequent arrests. If a police officer pulls someone over under suspicion of drunk driving, an arrest is likely to occur; they’re not just going to cite you for a ticket for being “honest” because you’ve already admitted guilt to drinking and driving which is a strict liability offense.

Furthermore, if you’ve been drinking police can likely smell the alcohol on your body or from your mouth and your eyes and your face are likely indicators of someone’s who’s been drinking. What’s likely to happen next is confirmation of those suspicions through field sobriety tests.

Do I have to provide police with my driver’s license or ID?