Everything You Need To Know About Michigan Divorces

There are few experiences more stressful, emotional and challenging than a divorce. This is especially true when a divorce involves legal issues such custodial disputes, significant assets and possibly even domestic abuse/violence. Because of the gravity of these issues and the financial and legal risks involved, it is important to make sure your rights and interests are protected.

Michigan is a no-fault divorce state, which means there does not need to be proof of infidelity or wrongdoing to initiate a divorce. All that is required to initiate divorce proceedings is for one spouse to testify that there has been an irreconcilable breakdown in the marriage and that there is no reasonable likelihood that the marriage can be preserved.

While fault is not required to initiate a divorce, the division of assets, judgements and settlements are often influenced by the amount of blame, fault or guilt of the parties involved. Due to the legal, social and financial consequences of a divorce, it is strongly advised to consult with an attorney who’s experienced with divorces in Michigan to ensure you have the best outcome possible.

To help readers better understand the context of the article, here are some of the most common terms found within this content and/or used throughout the divorce process.

Grounds For Divorce – These are the requirements to which someone can be granted a divorce. In Michigan, these requirements are detailed in MCL 552.6(1) which states that there has been a breakdown of the marriage with no reasonable likelihood it can be preserved.

Contested Divorce – When there’s a legal disagreement between spouses regarding a divorce such as one party refusing to cooperate with the proceeding or objecting to a specific aspect, both parties may have to argue their case before a judge. In this case, the divorce becomes “contested.”

High Conflict Divorce – High conflict divorces involve highly volatile situations such as abusive spouses, narcissistic personalities, and criminal behavior. These situations go beyond simple disagreements over assets or custody and are often dangerous for a spouse and/or children.

Appeals – Certain judgements and rulings in family court can be appealed there are two main types of these appeals. The first is Appeal By Right which involves final divorce judgments and post-divorce court orders. The second is Appeal By Leave which involves child custody, parenting time, child support, spousal support, etc.

High Asset Divorce – As the name suggests, high asset divorces involve significant finances and high net worth individuals. These divorces are unique in that they often involve hidden assets, estate evaluations, and the protection of one’s reputation.

Parenting Time – Parenting time refers to the amount of time individual parents are allowed to spend with a child after a divorce.

Spousal Support (Alimony) – Spousal support is also known as alimony. In short, this is the legal obligation for someone to support their spouse after a divorce or separation.

Prenuptial Agreement – This is a written agreement between two parties prior to marriage designed to protect assets in case the marriage is terminated.

How To File For a Divorce in Michigan

In Michigan there is no proof of wrongdoing required to initiate divorce proceedings. However, in order to begin filing for divorce, there are three legal requirements that must be fulfilled: 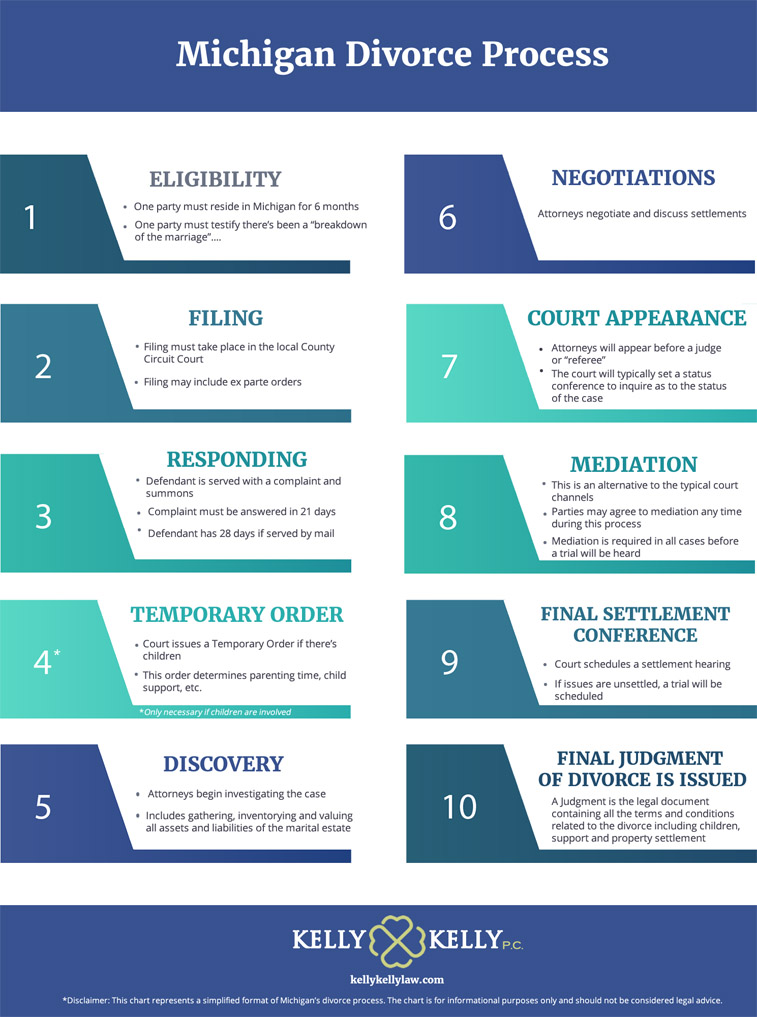 How Do Divorce Proceedings Work?

If the defendant does not file an answer, it becomes an uncontested divorce case and a default order may be entered.

In cases where a couple has children, a Temporary Order may be issued. This order determines details such as child custody, parenting time, child support, etc.

After the potential temporary order is issued, the divorce proceeding begins and the attorneys evaluate which issues are likely to be contested and also investigate and obtain information through the Discovery Process.

There are numerous methods for either party to obtain information and facts about the case from the opposing party of third parties. There are two different ways to obtain discovery; the formal process and the informal process. The discovery process should be aimed at gathering as much information as needed to either settle the case or proceed to trial.

The process can also be used to gather more information that can be useful in child custody and parenting time, and how child support is to be calculated in Michigan. Discovery methods are also useful in identifying the nature and value of real and personal property, and making determinations and persuasive arguments in relation to the status of separate property or marital property.

Knowledge about retirement and investment accounts may not always be equally shared during the marriage, and the discovery process is an opportunity to get a full accounting of the available assets.

After the discovery process, negotiations will take place between opposing attorneys. This may include exchanging proposals in writing, mediation, etc. Finally each party will appear in court and plead their case before a judge and decide whether or not they can reach a settlement.

There are times when a divorce agreement cannot be reached between the two spouses, and subsequently must go to trial. This is often referred to as an “ugly” or “nasty” divorce due to either one or both spouses behaving in a malevolent, combative and/or malicious manner.

When this happens, both parties will have their cases represented by legal counsel and brought forth before a family court judge. The judge then decides the most equitable arrangement based on the evidence provided by each party. Because of this, it’s critical to have an experienced divorce litigation attorney who can best represent your case to ensure you walk away from a divorce with your assets, livelihood and quality of life intact.

It’s fairly uncommon to discuss the topic of divorce without also discussing child custody. This is an ever developing legal issue especially for unmarried couples and same-sex marriages. All in all, issues involving child custody can be highly emotional and are often the cause for disputes and legal battles between couples. These issues can lead to what’s known as a “nasty divorce.” This section gives an overview of Michigan child custody laws.

In Michigan, the standard of child custody is known as “best interest of the child.” In other words, one parent cannot receive biological preference as the sole determining factor of custody. You can read more about this standard here.

Parties are free to come to an agreement on their own about parenting time which are subject to the court’s review or a court may determine the parenting time. Parenting time is modifiable in Michigan by the parties consent or a party filing a motion. Someone may also be granted a temporary order of custody if the final judgement is still being decided in court.

Here are some important terms to understand regarding child custody laws:

Legal Custody – Legal custody of a child is defined as a parent having the responsibility over major decisions regarding the child’s upbringing, medical treatment, school enrollment, religious instruction and other similar matters.

Sole Custody – In Michigan, sole custody means that one parent has primary physical custody as well as legal custody of the child.

Q. How much will divorce cost me?
There is no set total cost for divorce – however almost all attorneys charge set hourly rates. The amount of hours required depends on the amount of negotiating involved, whether or not it goes to trial, etc.

Q. Can you challenge a divorce judgement?
Yes. In Michigan, this can be done by requesting relief from the divorce judgement. This is accomplished by moving for a new trial/rehearing, amendment or correction of the judgement or a clarification. These motions must be brought forward within a year of the original divorce judgement.

Q. How is property divided in a divorce?
The division of property during a divorce in Michigan is not strictly a 50/50 arrangement. Instead this is decided based on what the judge determines to be equitable for both parties – legally referred to as “equitable distribution”. This is often the most contentious portion of divorce proceedings in Michigan.

Q. What is spousal support?
This is when one spouse has the legal obligation to financially support the other spouse, which can happen before and after a divorce has been finalized. Spousal support is commonly known as alimony.

When it comes to divorces in Michigan, there are many legal aspects involved throughout the process. Whether your divorce is contested or uncontested, it’s highly recommended to work with a family law attorney who specializes in issues related to divorce and child custody.