All About DUI’s In Wayne County, MI

The State of Michigan takes drunk driving offenses very seriously, with some of the nation’s harshest DUI laws on the books. As southeast Michigan’s most populous county, the number of OWI/DUI cases processed is by far the highest in the state. These cases can often result in jail time, even for first time offenders.

This article is intended to provide clear information on everything surrounding DUI offenses in Wayne County, including penalties, potential impact on an individuals future and legal options that can be pursued.

Wayne County is considered to be the central part of the Detroit Metropolitan Area, with the City of Detroit falling entirely within its borders. This is the most populous county in the state, with Oakland County being a close second. The court system that typically processes drunk driving cases in this County is the 36th District Court, located on the northeast corner of Brush St and Madison Street in Detroit’s downtown area. As the largest district court in Michigan, this court handles a large volume of other criminal offenses in addition to DUI.

When someone is convicted of drunk driving in this county and is sentenced to serve time in jail, the Wayne County Jail system is where the offender is most likely to serve their sentence.

Here’s a list of the cities that comprise Wayne County:

Many individuals get confused when trying to understand the various legal jargon used for drunk driving offenses. The most common question people ask is what the difference is between DUI and OWI.

From a conversational standpoint, there is no difference between DUI and OWI as they mean the same thing. These acronyms are often used interchangeably to describe the same offense, known as drunk driving. In Michigan’s legal system, Operating While Intoxicated (OWI) is now the only proper term recognized for most drunk driving offenses in the state. Neither law enforcement or court systems use the term DUI in any of their reports, citations, paperwork or official duties.

Generally speaking, OWI in the state is defined as operating a motor vehicle with a blood alcohol content (BAC) of 0.08% or higher. In addition to this, an OWI can also be defined as operating a motor vehicle under the influence of any amount of a controlled substance. There are other BAC and intoxication levels that can possibly be used, some of which are subjective and open to the judgment of the law enforcement officer handling the encounter. An individual can be charged with an OWI if an officer deems that any level of alcohol consumption has impaired their ability to drive. 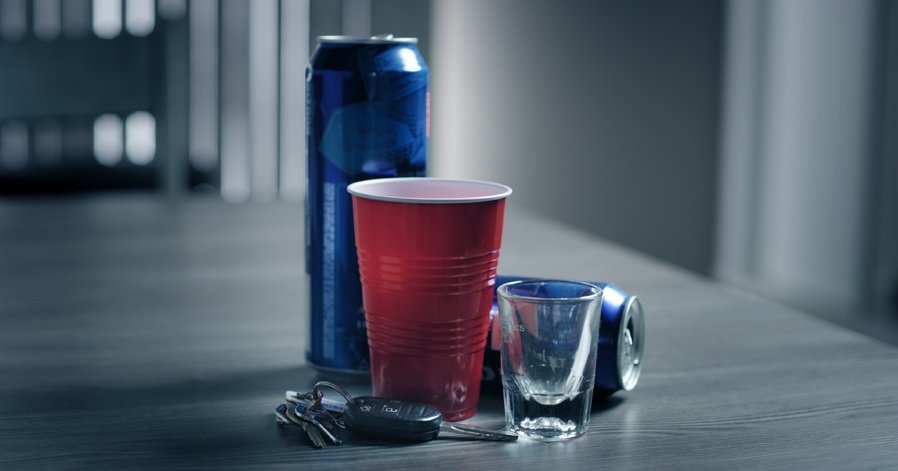 Below is a list of the most common drunk driving offenses that an individual can be charged with in the State of Michigan.

OWI – The most common type of drunk driving offense, Operating While Intoxicated can occur when an individual’s ability to drive is impaired or affected due to the consumption of an alcoholic beverage. The actual BAC limit varies but the standard BAC limit is 0.08%, with other limits for certain situations such as underage individuals and heavily intoxicated drivers.

OWVI – There are certain situations where law enforcement may make an arrest if they see evidence of a driver’s impairment regardless of the actual BAC level. Known as Operating while Visually Impaired, this offense can be challenged for individuals to navigate due to the fact that it is up to the officer’s judgment and can be considered subjective.

Will I Receive Jail Time?

It should go without saying that people want to avoid jail time for an OWI offense. In Wayne County, this outcome depends on various factors. Generally speaking, first time offenders will not receive jail time if their BAC levels are not in the “super drunk” territory (0.17% or higher). However, judges in Michigan are granted the ability to sentence individuals to jail time for even the most minor first offenses.

Wayne County courts are usually more lenient than neighboring Oakland County where it is common for individuals to be sentenced to jail time for their first OWI conviction. Despite this, it is still vital to enlist the services of an experienced OWI attorney with knowledge of the local court system. Having this legal expertise on your side can ultimately be the difference of whether or not jail time will be part of an OWI sentence. 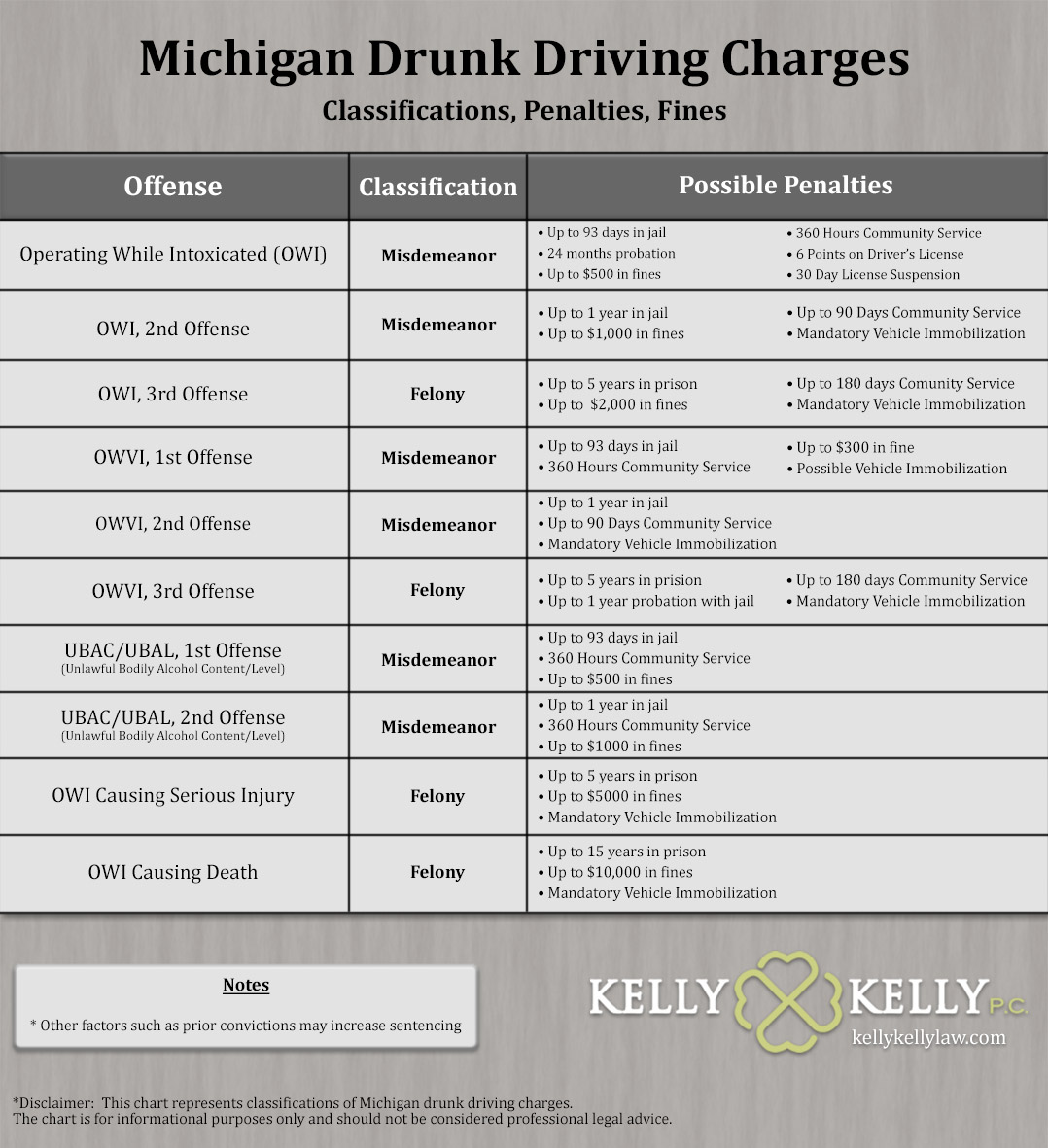 Historically speaking, prior to 1980 drunk driving laws and associated penalties were less strict in Michigan and the United States a whole. This all changed with the founding of MADD (Mothers Against Drunk Driving) by Candace Lightner. Motivated by the tragic death of Lightner’s 13-year-old daughter as the result of a drunk driver, this group has tirelessly worked to eliminate drunk driving in both the United States and Canada. The majority of the harsh DUI penalties in place today are a direct result of this group’s work.

Under Michigan law, OWI (driving under the influence) is defined as having a BAC (blood alcohol content) of 0.08% or higher. There is a second standard categorization for exceptionally high BAC levels of 0.07% or above, which is referred to as “super drunk”. Additional limits are set for those operating commercial vehicles and individuals under 21, with BACs of 0.04% and 0.02% respectively. The ultimate aim of these Michigan DUI laws is to prevent drinking and driving as a whole.

There are a number of different penalties than can result from a drunk driving conviction. These may include:

When an individual is arrested and charged with OWI, it is critically important to hire a lawyer specializing in drunk driving cases, especially one that’s experienced in the local court systems. While all attorneys pass the same BAR exam, their real world skills and specializations are not the same. Attorneys who may be well regarded general practice attorneys or those that focus in another area of law may not have the same working relationship with judges, clerks and the intricacies of Wayne County courts when drunk driving cases are involved.

Ultimately, hiring an excellent attorney with experience in navigating the Wayne County courts is the best path to achieve the most optimal outcome. If you have found yourself arrested in Wayne County for an OWI or other drunk driving related offense, please reach out to our experienced Michigan DUI defense team today.